Don't Panic! Yes, you shouldn’t panic. Why panic? Things are good, aren't they? Speaking of "things"...."Don't Panic!" is also the name of IsenSeven’s 2010 snowboard movie, premiering at The Woods in Newtown on Saturday the 23rd of October, brought here to cool our sunny summer temperatures by Snowboarder.co.za, Scratch Media and Gone Skiing and followed by a not to be missed BANGER PARTY!


IsenSeven have travelled to powdery Euro resorts, snowed-in German and Scandinavian cities, slushy California parks, Russian ghettos and all kinds of other fun places.....except Vegas, no snow there this year.....

With a bunch of new riders, familiar faces and new additions to their production team, they have regrouped to form a snowboard-movie-super-alliance which even the United Nations couldn't shake a stick at.

So click on the facebook link below and join the event so everyone knows you’ll be there!

Entrance is FREE and be sure to bring your barf bags cause there's gonna be some spinning that will make you DIZZY!!!
No comments: 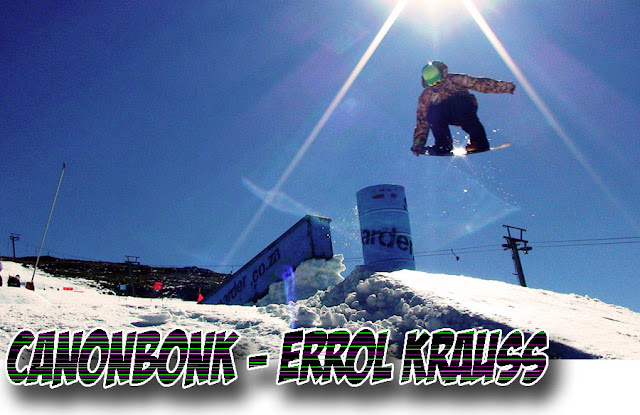 Three weeks into the season and the Afriski Park for 2010 is starting to take shape. Pictured above is Errol Krauss on the canonbonk feature dug in on the weekend of the 26th of June. The plan for the season is to set up a fresh signature feature every weekend. New video clips will follow soon so keep coming back here!
(Photo by Mike Rassmann)

The final vid from 2009 with riding from the last few weekends of the season and the biggest kicker Africa has ever seen. From this clip it can be seen that the SA snowboarding scene has come a long with only the sky and the ability to fabricate more snow being the limits.
(Cinematic pans of local scenery by Marc Kotze and driving shots by Bronwyn Biccard other stuff filmed by Mike with some assistance from Stefun and Mamo)
No comments:

As promised and apologetically after a long time here is the start of the roll out for the videos from 2009. Highlights from the Kings Cup Snowboard Slopestyle event for your viewing pleasure.
No comments: 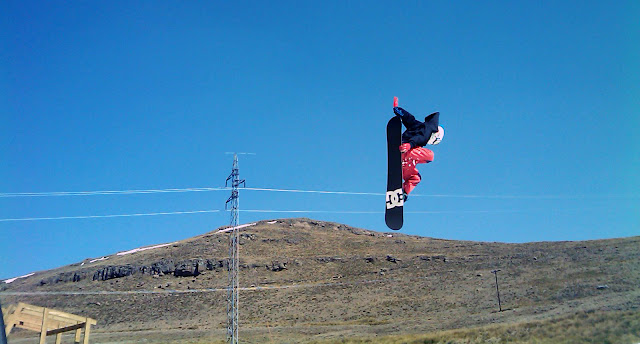 The 2009 winter season is officially over. The last weekend up at Afriski saw slushy conditions which meant early mornings and late evenings to get in on the best riding conditions. Head Afriski Park technician Ruben Storbeck pushed an epic 30ft kicker for the weekend and helped us dig in and groom a sweet box hip setup for a night shoot on Saturday. Big ups to all the riders (Stefun, Mamo, Smarta, Marci, Kat, Claude, Mattress, Ruben and Wade the punisher) who made it up to Afriski for the weekend and especially to Ruben for providing such a sweet setup.
(Photo of Marci above by Mamo)